- May 16, 2016
Since we last checked in with Doron Gazit, the artist and industrial designer has lined multiple locations in California with The Red Line and his art work is currently on exhibit at the San Luis Obispo Museum of Art as well as The Loft at Liz's in Los Angeles. He is being mentioned in one breath with Cristo!

We look forward to working with Doron to wrap an environmentally themed event.

We were happy to report on The Red Line at the Dead Sea in September 2015. In the 8 months since, Doron has installed his environmental awareness art project in several locations in drought ravaged California. As always The Red Line concept highlights the impact of Global Warming on the environment.

In December of 2015, The Red Line snaked through the Pyramid Lake burn area, just North of Los Angeles. 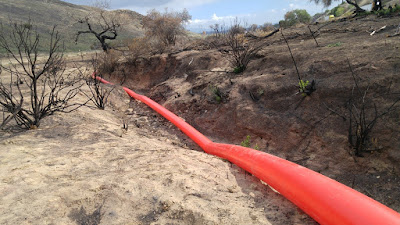 Doron Gazit:
"After my Red Line installation in the sinkholes of the Dead Sea, I continued to draw the line north of Los Angeles among the burnt trees close to Lake Pyramid.  This is a continuation of my planned installations in locations around the world affected by global warming.  The black surface of the environment was a striking contrast to the Red Line. It was very sad to work in this devastation knowing that just a short time ago it was green and full of life. I did this installation together with my friend Jordan Dawes, who is an excellent photographer and videographer. I also received great help from CalArts Professor Michael Darling, who lives close by and helped me find a couple of sites containing burnt forests."

Next came an installation in Laguna Lake, CA.

Doron:
"I brought the Red Line Project to the dried out Laguna Lake in San Luis Obispo. Between the drought and constant silt build-up over the past 40 years, a huge portion of the lake has unfortunately dried up. The water-less land in the lake was extremely cracked and broken. I’ve seen many landscapes afflicted by the drought; this one seemed to symbolize dryness. It was very unpleasant to walk on this hard soil, there were no soft spots to be found.  Additionally, there were very strong winds – We had to change the placement of the Red Line so that the wind would carry it where it needed to end." 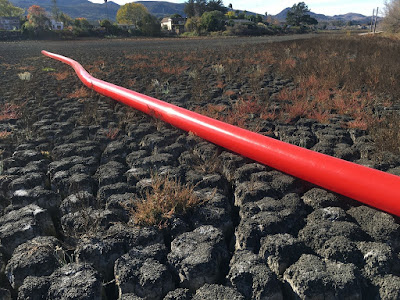 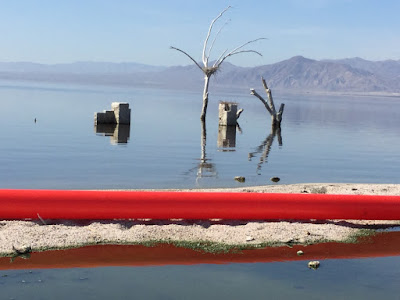 He followed up with an installation at the Salton Sea, an environmental disaster in progress in California's Coachella and Imperial Valleys as part of the Deborah Martin Exhibition "The Salton Sea- Lost in Paradise" at the Marks Art Center in Palm Desert, CA. 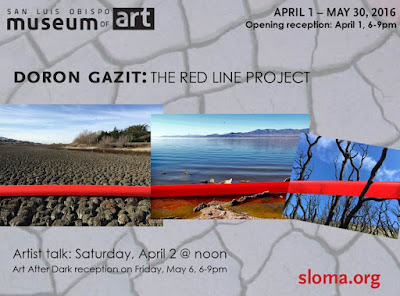 The Red Line Project art work is currently on exhibit at the San Luis Obispo Museum of Art until the end of May.

"Elements" - a group show in Los Angeles, opened this past Saturday and continues until June 20th.
Doron's work represents wind and air.

An outdoor installation of the Red Line in a Los Angeles area park is in the works - keep your eyes open this summer! 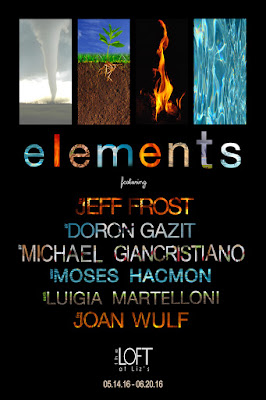 Janet:
"The fast success of Doron's work in the art world is very indicative of the timely relevance of his message. Furthermore Doron's dimensional inflatables give us a lot of creative freedom in event design. We have used them for many looks, such as these "ice flowers" for a winter event. I'd love to wrap a building and really get the communities' attention drawn to Doron's environmental art. 90% of California are still in a state of drought, even after the El Niño winter. We are not out of the woods and water use restrictions remain in place. It would be wonderful to blend art-with-a-message and event design." 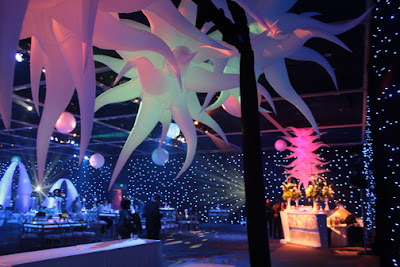 Popular posts from this blog

Site Report from The Fabulous Forum in Inglewood 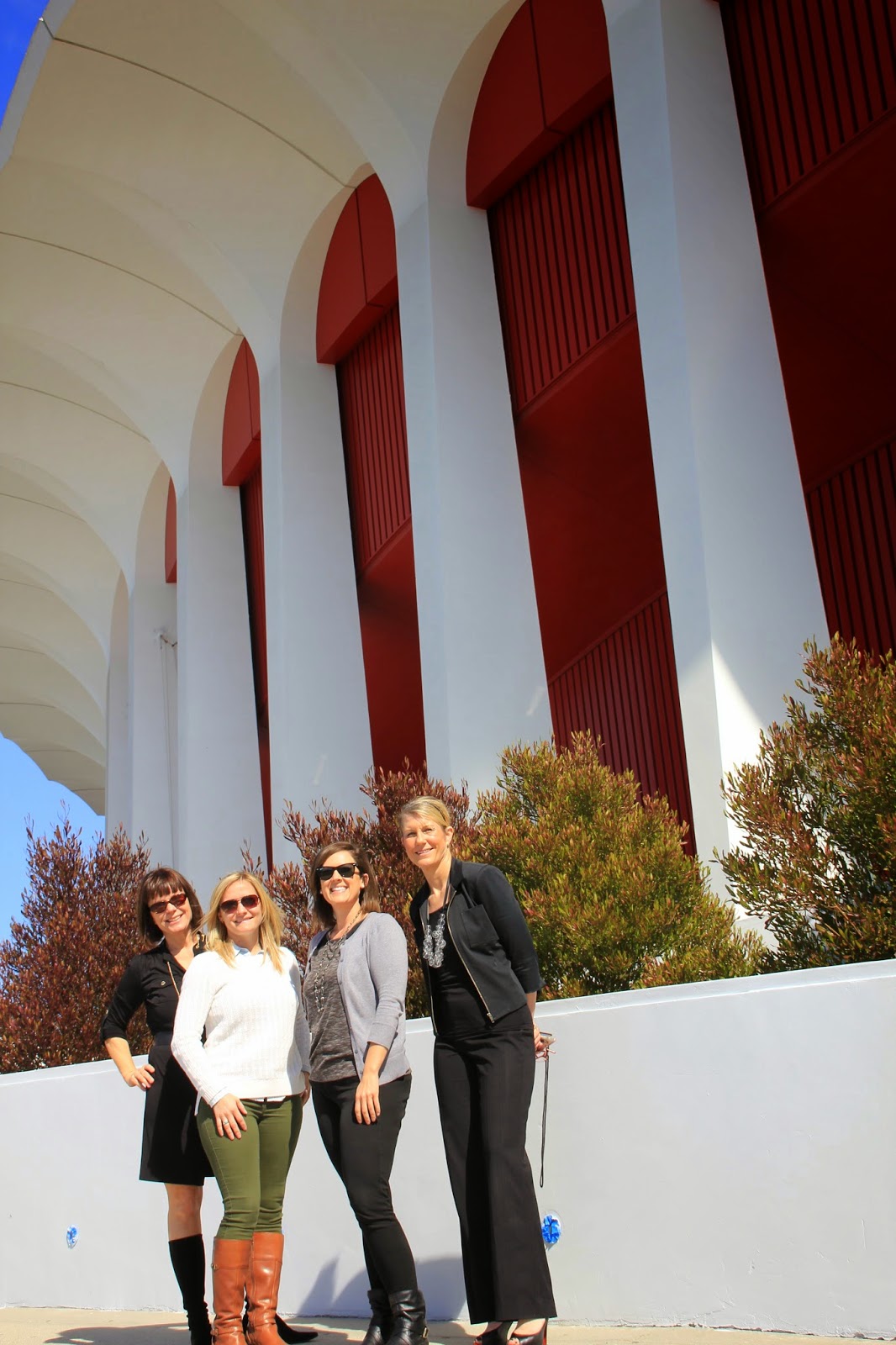 We recently had a Fabulous Tour of the Fabulous Forum, courtesy of our friend Jill Przelenski, Director, Special Events & Family Entertainment. In a nutshell: the re-invented Forum deserves the media hype it received. Eagles' Glenn Frey exclaimed: “The Forum is the best sounding large building anywhere in the world. Take my word for it, we’ve played them all.” It also offers exquisite event space possibilities that allow us to create a VIP Experience of any size! The legendary Forum Club serves as special entrance for private and corporate events. It's a VIP Experience from the first moment onward as this area has special parking privileges and street access.  Painting and maintenance crews were hard at work inside and outside of  the new hall that reopened in January 2014.  Jill Przelenski: "We don't allow any wear and tear. Paint, carpets, furnishings - everything gets lots of attention and is constantly updated." Forum Red, inspire
Read more 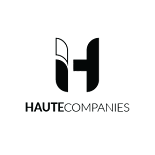 We have very positive news to share and we want you to be the first to know. We have spent a lot of time researching how we can best address your needs in a post-pandemic world.  We have weathered a number of crises in the 32 years of EventWorks' existence and we decided to reinvent ourselves, yet again. We are going big!  We are very happy and excited to join Austin, TX, based Haute Companies.  Haute Companies is a collection of five brands that embraces the unconventional to build human-to-human connections.  Please see attached press release for more information about Haute Companies. We look forward to talking to you soon to share more about the exciting possibilities and how this adds to your toolbox. Here's to many more exciting events! Warm regards, Alisa  P.S.: Alisa remains available at awalsh@eventworks.com
Read more

What You Really Need To Know About Covid-19. Advice From Pia MacDonald, MPH, PhD.

The timing could not be any better! We had the chance to hear a presentation by Pia MacDonald, PhD, MPH, CPH, from RTI International last week. Pia has two decades of experience in domestic and international epidemiological research and public health. She has an extensive background in infectious disease epidemiology and surveillance, global health security, public health preparedness, and outbreak investigation and response. Please read her expert assessment of the COVID-19, also known as Coronavirus, situation. IN A NUTSHELL: "Looking closely at the data from China, the WHO-China Joint Mission COVID-19 report indicated that most transmission occurs within households, NOT within the health care settings, or in airports, planes, trains or on streets." "In the US, to be clear, this is no longer a travel associated outbreak. There is community acquired infection, so the outbreak is domestic and global." PRESENTATION IN 3 PARTS COVID-19 in the conte
Read more

TheNewsFromeventworks
Haute Rock Creative / EventWorks is nationally recognized as one of the top firms in production, design, branding, event planning, and fabrication. In joining with Haute Companies, we have created one of the largest, top-tier agencies in the US for corporate, sports, and entertainment clients. Haute Rock Creative/EventWorks is a powerhouse, single source for all agency, event, and marketing needs. Together we bring ever-evolving possibilities to clients who seek to break far and away from competitors.